The duel for the calendar: "Agile" versus "Classic" meetings 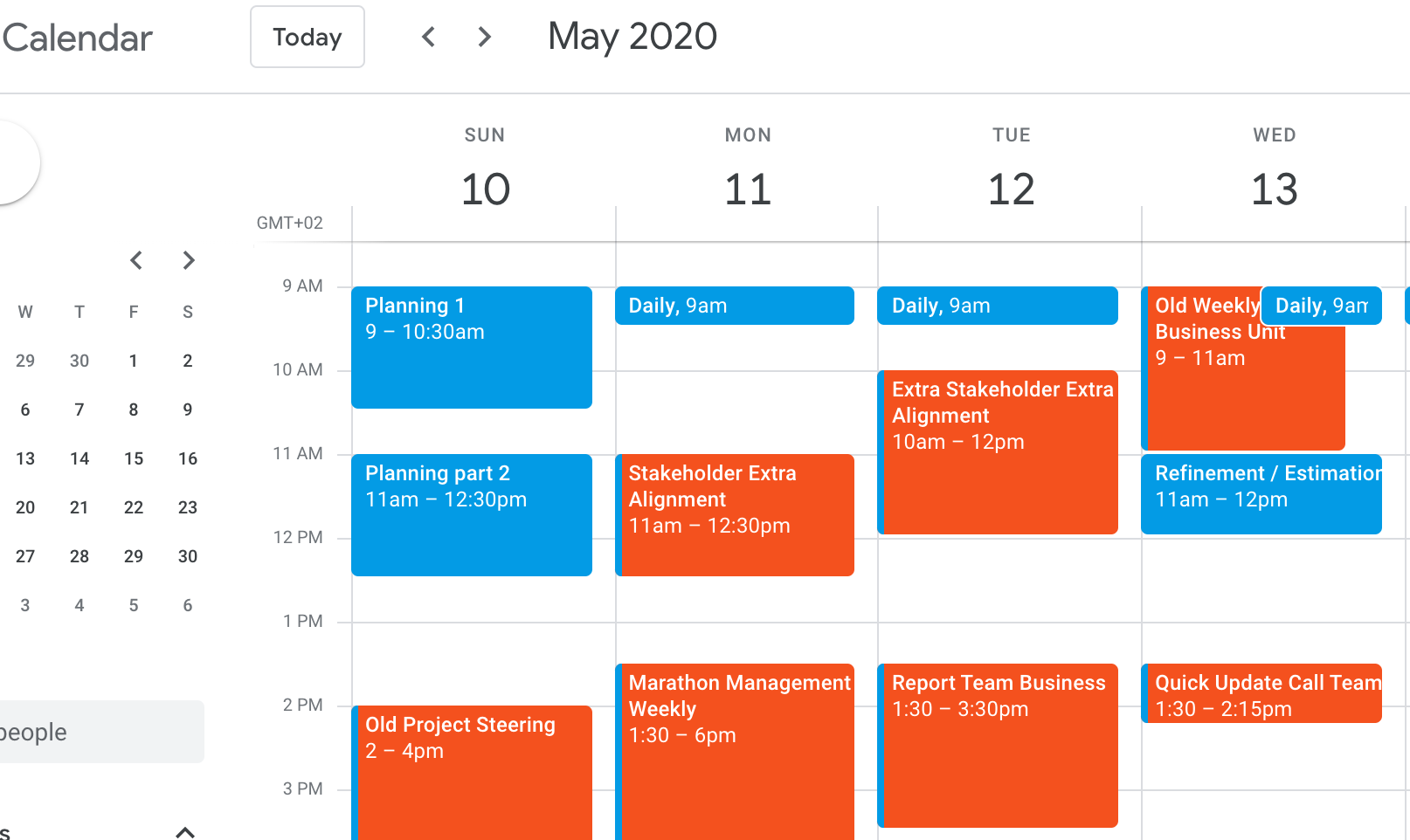 Daily, Weekly, Retrospective, Lean Coffee... Agile methods come with a variety of meetings. Each of them was developed for the agile method and makes a lot of sense for this. It becomes problematic when these "new" meetings do not replace the already existing ones, but rather push themselves into the gaps between them. Here we want to show what happens in the appointment calendars of many employees when agile methods are introduced and how this phenomenon can be counteracted. 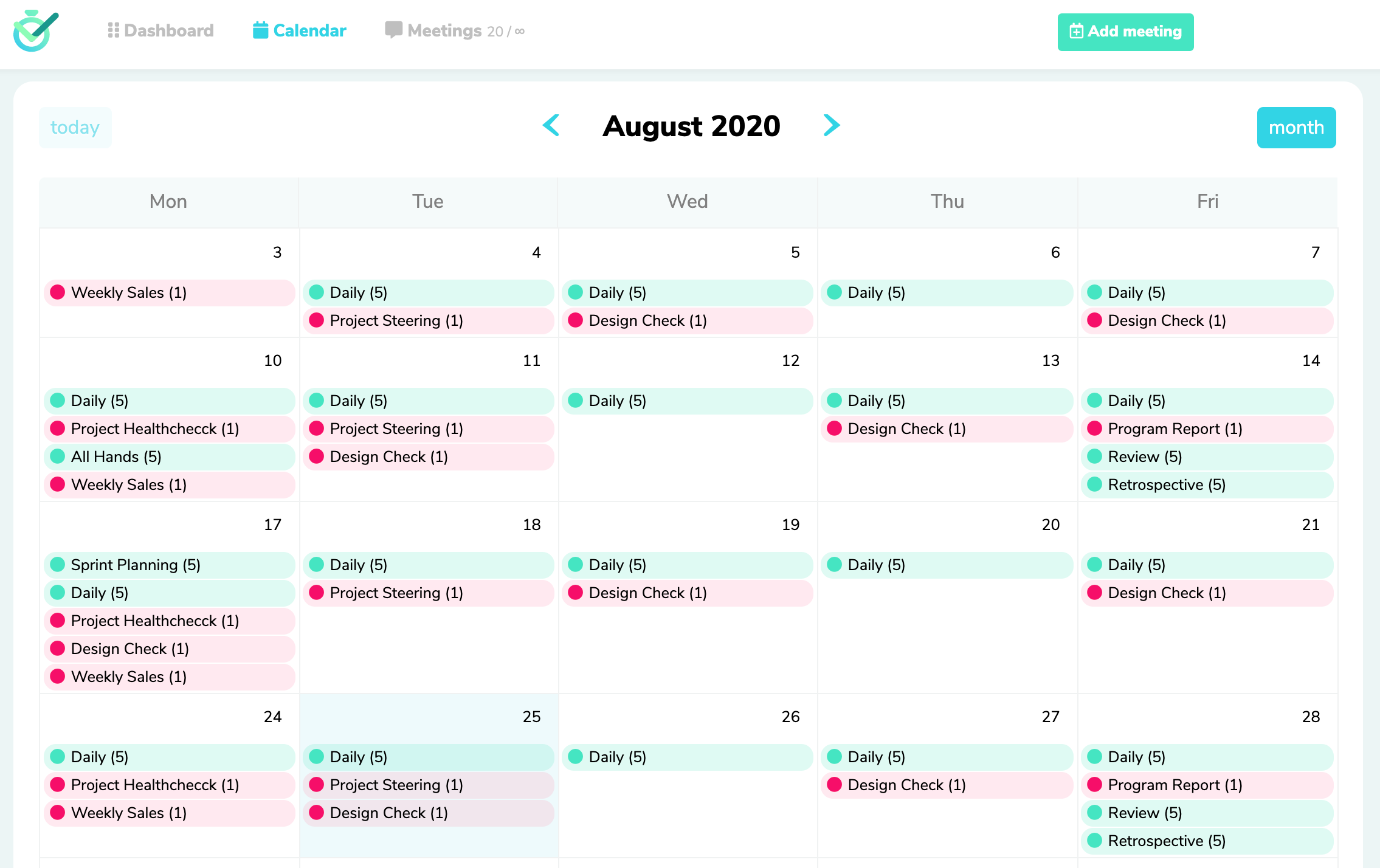 When companies introduce agile methods, they want one thing above all: to increase efficiency and effectiveness. Everyone should be aware that the introduction of agile methods is not quite trivial. After all, they are not introduced on a greenfield site. The employees have already worked together, followed processes and held meetings before the introduction. So the old meets the new world. It is clear that problems can arise here. One of these problems, which is completely obvious but still receives far too little attention, we would like to highlight here. It is about the calendar, or rather about time that is used sensibly and senselessly.

So let us imagine an employee in whose team Scrum was recently introduced. Now he sits at his desk in the morning and uses Outlook to confirm his acceptance for the Daily Scrum, the Sprint Review and the Sprint Retrospective Meeting. At the same time he receives appointments for the monthly presentation of the project status to other departments. He also notes that existing appointments such as the Jour Fix with his supervisor or the monthly team meeting remain. Of course, short-term coordination appointments are still pending. So he sits in front of a completely overfilled appointment calendar.

So now the agile work starts. The process is running and the tasks are clearly distributed. The timeframe of the To Dos is clearly defined and mostly estimated in a sportive way. After all, the aim of agile working is to become more efficient, to gain time. But right now a downward spiral begins. And there is a reason for this: the calendar is too full. With too many meetings from the old, non-agile world, which cost a lot of time for too little added value. But since the individual employee only has 40 hours a week, he has to price in the time he spends in the “old” meetings when he estimates how much time he will need for certain tasks. This slows down the overall process. In addition, the quality of the individual meetings deteriorate from time to time. There is simply not enough time to prepare them properly, and you are already busy with the things that need to be discussed in the next meeting. In other words: The employees are only stuck in meetings, and have no time at all for their actual work.

The old and the new world

But how do you deal with this problem? The meetings that were introduced before the introduction of agile working methods certainly had a reason and perhaps still do. So you can't abolish them all rigorously. However, the "new" meetings are an integral part of the newly introduced methods. Their cancellation would mean a departure from the textbook, which is certainly not an obvious impulse at the beginning.

The solution can be found in another textbook, the so-called Agile Manifesto. 17 software developers, including the two Scrum founders Ken Schwaber and Jeff Sutherland, wrote down the central values of agile software development in 2001. One of the principles states that people and interactions are above processes and tools.

Of meaningful and meaningless meetings

So why not ask the employees? A method called "Return on Time Invested" (ROTI) can help here. After each meeting, participants rate its usefulness on a scale of 1 (pointless) to 5 (very good). In addition, they provide the meeting owner with qualitative feedback to improve the meeting in the future. If you apply this method consistently after each meeting, you will quickly find out which meetings make sense and should therefore continue and which meetings do not add value. If you find out over a longer period of time that even the implemented improvement measures for those meetings do not bring any results, you have to abolish them consequently.

This sets a cleaning process in motion, which every employee can quickly recognize in his or her own calendar. Important meetings are further improved, the time used for this is thus utilized even better and meaningless meetings no longer take place. There is more time for the actual work and the speed that the introduction of agile methods should bring is restored. Of course this also has a positive influence on the motivation of the employees.

Because who likes to waste time?