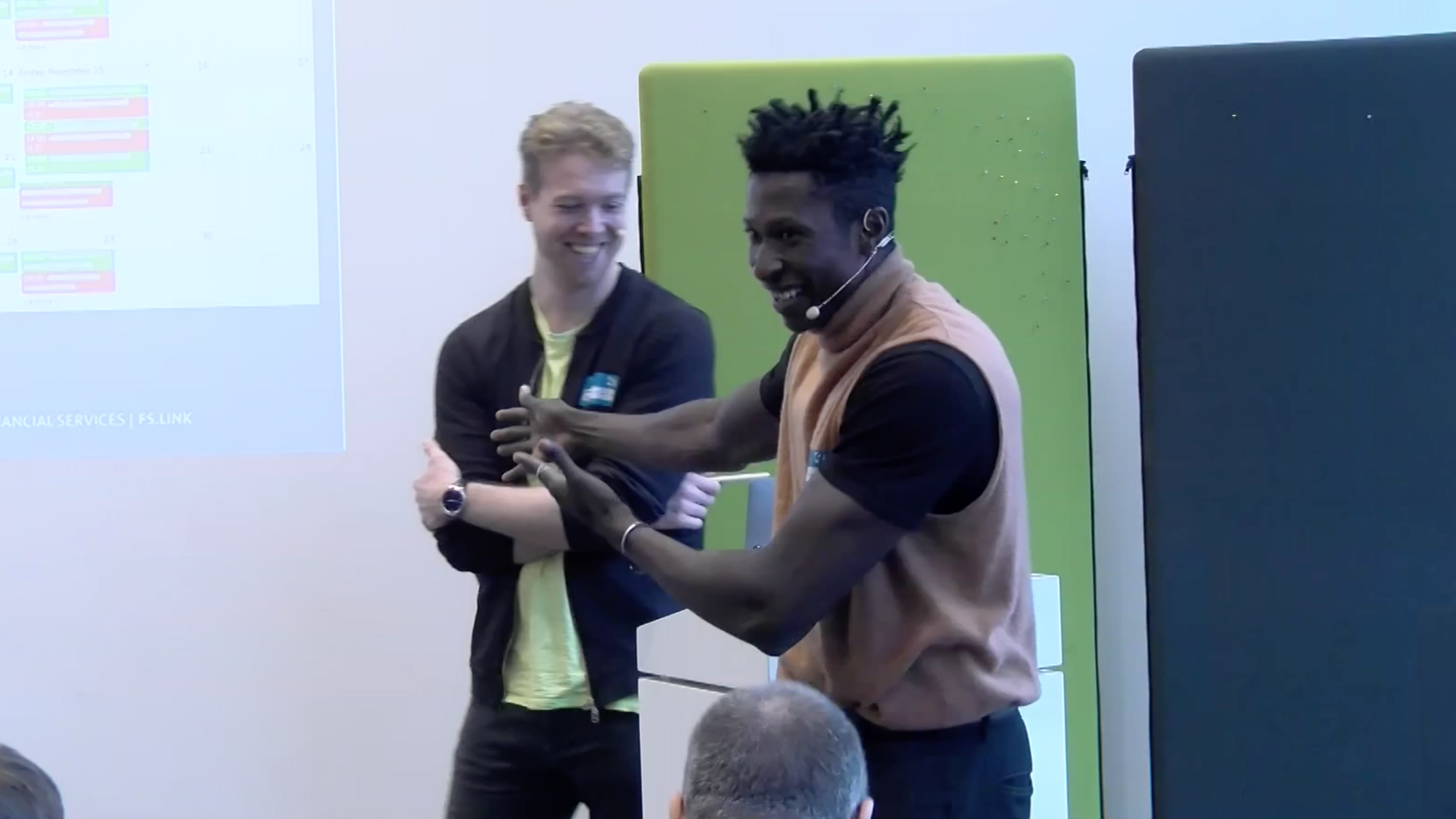 During the eighth Tools4Agile Teams conference in Wiesbaden, Germany, which took place from 21st to 22nd November 2019, Mathis Christian and Mo Kalawa presented a project study that they had conducted at Volkswagen Financial Services. For the past ten years, Mathis Christian has been a coach and consultant for agile work; he is also the founder of TimeInvest, which is an online tool that ensures companies hold for more productive meetings. Mo Kalawa works with Volkswagen Financial Services, where he is responsible for the effective introduction of agile working methods as Agile Lead.

Volkswagen Financial Services started a Digital Hub in Berlin about four years ago, aiming at digitising the company's entire product range. This is intended to increase cost efficiency on one hand, and to enable an omnichannel approach on the other hand; this ensures that all customers have an opportunity to come into contact with the Group's products on all digital channels, as well as using them.

All efforts to achieve these ambitious goals were based on Lean Principles, a Build-Measure-Learn cycle. Especially at the beginning, mistakes were made. But we learnt from them, pivoted the strategy, and continued to pursue the goal.

Kalawa noticed that a huge number of meetings took place. In fact, there was an average of 25 meetings every week. He noticed that the meeting participants were not paying attention in appointments, that meeting leaders were often unprepared, there was generally meagre participation in the discussion, and quite a good number of the meeting attendants usually arrived late.

Inefficient meetings as a cost factor

When Mathis Christian asked the audience if they had already had similar experiences in the past, the speeches clearly showed that Kalawa is not alone with these problems. In fact, a study carried out by a consulting firm, Bain & Company, found that a weekly meeting of a middle-management employee of a large company costs this organisation up to $15 million. For smaller companies with 100 employees, this means a cost of around $100,000 to $500,000. The study also indicated that the executives spend an average of twenty-one hours a week in meetings, eight hours reading emails, and only eleven hours of practical individual work. In reality, it would not even be necessary to attend most of the meetings.

Return on Time Invested as a solution

Return on Time Invested, (ROTI), is a simple method to analyse whether the conducted meetings are useful or not, or to improve on the meetings, where necessary. It simply captures the meeting participants feedback on whether they found the meeting useful or not. This is done classically with post-its, which are pinned to a bulletin board by each participant at the end of each meeting. You use a scale from 1 (very poor time investment) to 5 (perfect time investment) to indicate your rating for the meeting in retrospect. However, since this feedback must then be evaluated manually by the meeting manager and this process again takes up valuable time, Mathis Christian and his team have developed the TimeInvest tool. Volkswagen Financial Services used the tool for several months in the Digital Hub in Berlin, and Kalawa presented the results.

The tool is based on four steps; create meetings, send evaluations to participants, receive evaluations, and act on this feedback.

From full calendar to efficient calendar

With TimeInvest, meeting participants have the opportunity to leave qualitative feedback about the meeting. This gives the meeting manager the chance to make the necessary improvements. If there is no improvement in the evaluation of the meeting, it can be assumed that the meeting has no added value. Volkswagen Financial Services agreed to consistently abolish meetings that received a rating below 3 in the long term. 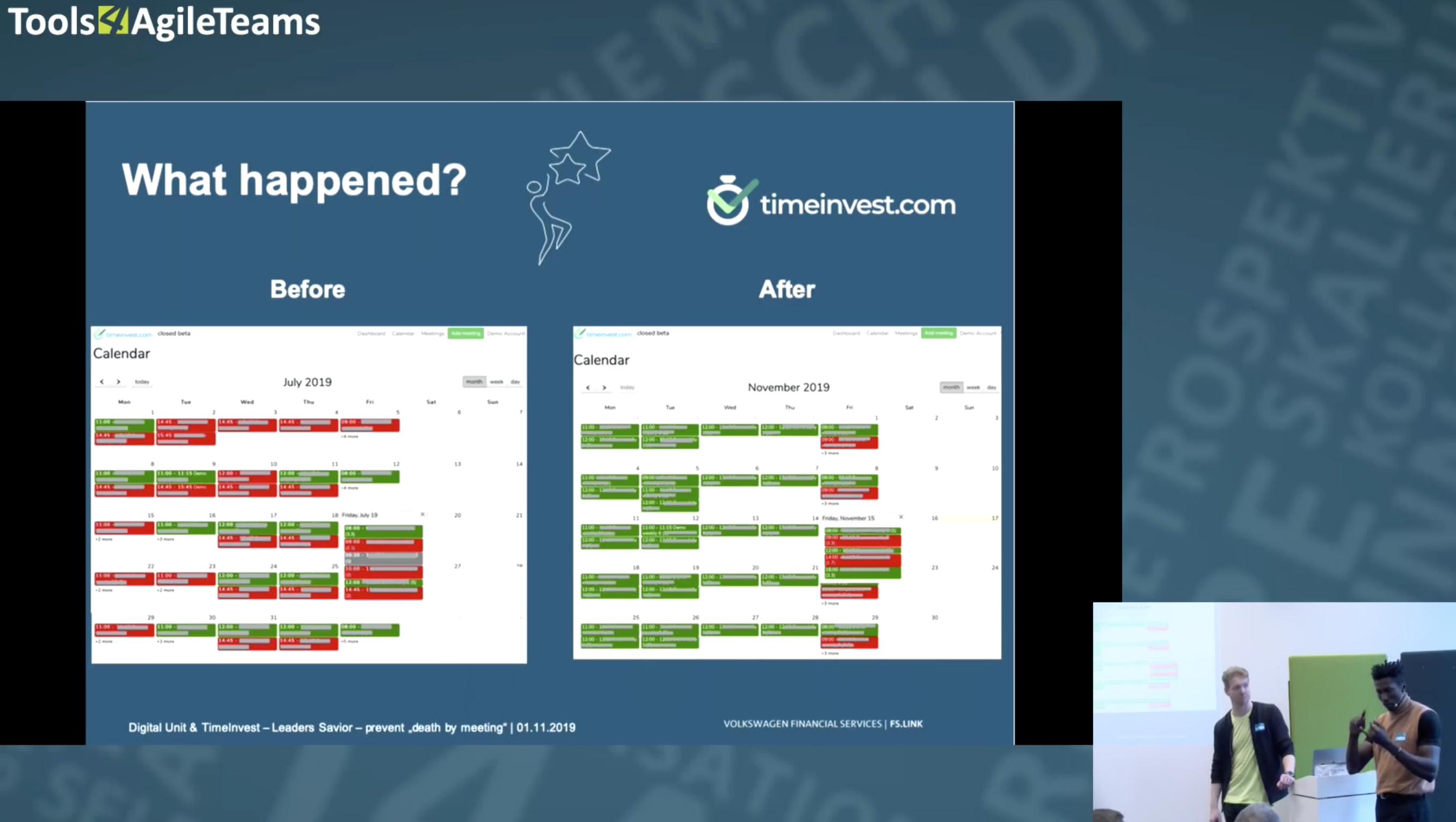 Kalawa showed the audience a monthly calendar view at the beginning of the use of TimeInvest and several months later. At the beginning, the calendar was full, and the meetings showed - recognisable by a red colouring - that it was poorly rated. Five months later, the calendar showed a completely different trend. Most of the meetings were coloured green. Additionally, the calendar showed considerably fewer meetings than before. With TimeInvest, managers were able to increase the effectiveness and efficiency within their teams, and employees felt carried away, as they could evaluate meetings, and to some extent, determine how they utilised their time.

For Kalawa, the successful use of TimeInvest for several months made two recommendations for action in particular apparent, which he did not want to withhold from the audience at the end of the presentation:

According to Kalawa, this is the easiest and the cheapest way to increase efficiency and effectiveness in organisations.